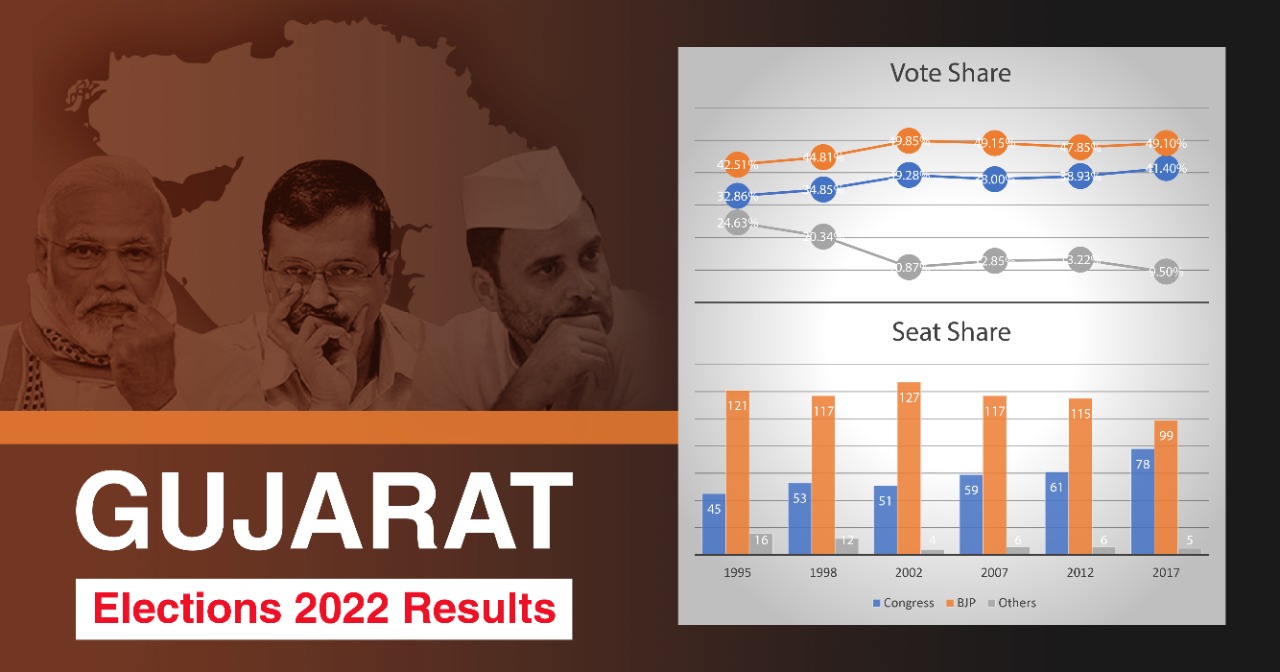 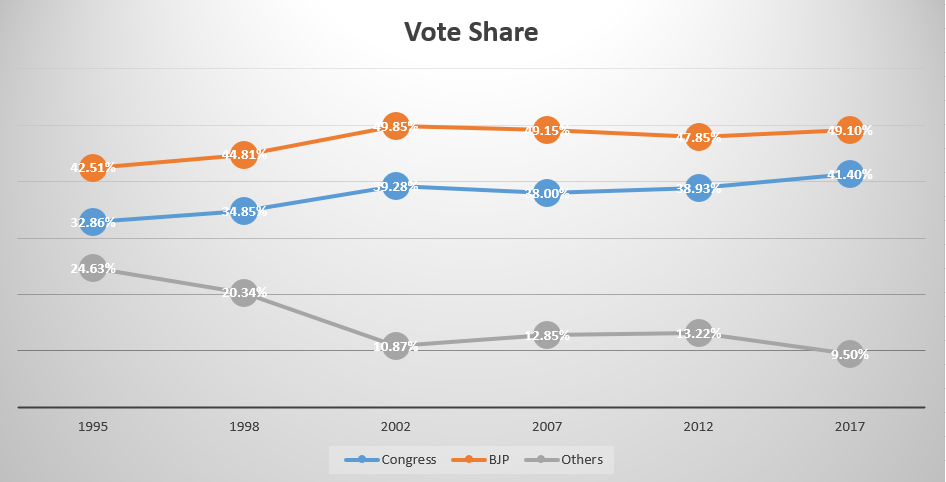 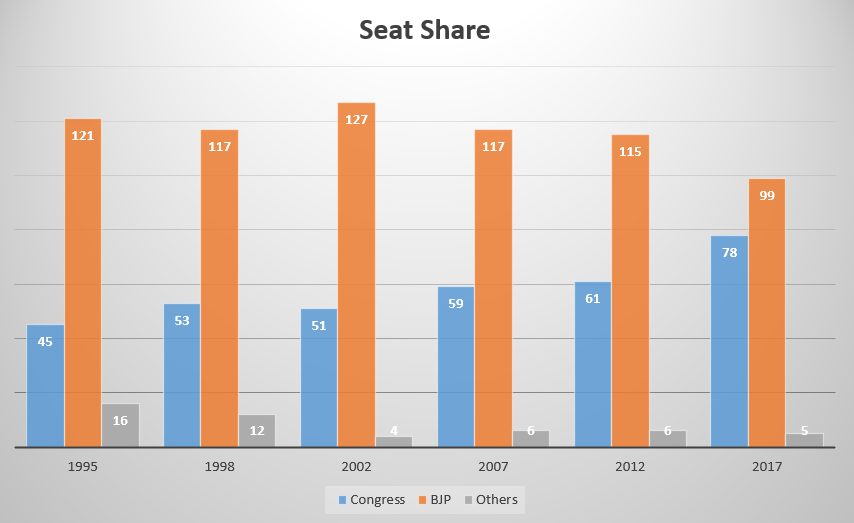 If we look at the charts, BJP has been maintaining around 49% vote share for the last 4 assembly elections and have been consistently getting 115 plus seats except in 2017 when it managed to get better vote share than 2012, still managed 16 less seats. This was because Congress managed to increase its vote share by around 2.5%.

In 2022 elections, it is a 3-way contest with Aam Aadmi Party (AAP) also in the race. AAP is a new entrant and would get more votes in urban Gujarat including Surat compared to rural Gujarat. However, AAP may seriously dent the Congress vote share as it would divide the anti-BJP votes. AAP might not manage to get even 10 seats in Gujarat but even if it manages to get 15% vote share, it would majorly be at the cost of Congress. If Congress vote share falls from 41.40% to around 32%, its seats may fall from around 99 seats to less than 50 seats. Gujarat 2022 assembly election results might look something like this:

In 2017 Gujarat assembly elections, Congress gave a good fight to BJP on the back of Patidhar stir or the Patel quota stir. Congress also managed to project 3 young leaders during the 2017 elections. Compared to 2017, Congress neither have any specific poll issue nor any leader to project. Congress is banking on anti-incumbency. Anti-incumbency against BJP has not worked in Gujarat for last 25 years and it would not work this time. Narendra Modi is seen as the son of the soil and Gujaratis are proud that a fellow Gujarati is Prime Minister of the country. Modi has been Chief Minister of Gujarat for 13 years and won 4 elections in the state under his leadership. His face still attracts votes in Gujarat and no other leader even comes close to him in terms of attracting voters in Gujarat.

The bigger problem for Congress this time is the split in anti-BJP votes due to presence of AAP. Anti-incumbency cannot work in Congress favour until they are able to attract most of the anti BJP vote. However, due to entry of AAP this anti-BJP vote is getting split.

There is one community that always vote against BJP and will this time also vote against BJP. However, it would be interesting to note whether their votes get split between Congress and AAP. Generally, this community is very smart in consolidating their votes and have structure in place through their religious leaders and religious institutions for proper communication to all members on which candidate to back in each constituency. However, same is not true for other communities, and we will see major split of anti-BJP votes. Good news for Congress is that AAP will get more votes in urban area while Congress generally wins more seats in rural Gujarat. Hence, the overall impact of anti-BJP vote split might be less brutal for Congress.

However, this brings us to the important point we want to make against the current election system:

Let’s first understand these two methods and how it works. Our current election system for Lok Sabha (General election or national elections), State Legislative Assembly Elections and Local body elections is FPTP. Basically, this system requires simple majority. The candidate who gets the maximum votes wins, no matter whether he got 10% vote or 100% vote. If a candidate gets, 10% vote and all other candidates get less then 10% vote, still the candidate with 10% votes wins. In this system, more the number of candidates, lesser the number of votes required to win.

To understand this better – suppose BJP got 47% votes, Congress got 32% votes and AAP got 21% votes. On the basis of FPTP system or the simple majority system, BJP would be declared the winner. However, if STPV system or absolute majority system is used, AAP votes would be transferred to the second preference candidate for all voters who gave first preference vote to AAP. If all the AAP voters have put Congress as the second preference, then new result would be BJP – 47% and Congress 53%. Hence Congress would be declared the winner. In STPV method, splitting of votes does not help any candidates and hence it is much fairer system then FPTP system. In STPV, a candidate must get preference vote of more than 50% of the voters.

In a polarized elections like we are having these days and when anti-incumbency is the main agenda, there is high chance that anybody not voting for BJP is voting against BJP and would put BJP as their last preference. In such case, a candidate selected by STPV system is better representative of people’s choice then one who won by simple majority.

FPTP system leads to many kinds of manipulations and not so good practices like forming of political alliances just to avoid splitting of votes during elections, filing of nomination papers by dummy candidates to split votes etc. In a state like Maharashtra, BJP is forced to form alliance with Shiv Sena and NCP is forced to form alliance with Congress as otherwise split of votes would benefit the other alliance. In STPV method, each party can fight elections independently, and the most popular candidate would win as there would not be any splitting of votes.

The next question, you might ask, then why FPTP post system is used and not STPV system. If STPV method can be used in President of India election, Rajya Sabha MP election, State Vidhan Parishad then why not State Assembly (Vidhan Sabha) elections?

The answer is – manual counting of STPV is very complicated due to the process of transfer of votes and EVM machines are not advanced enough to record more than one preference. Institute of Chartered Accountants of India (ICAI) which used STPV system, spends 1600 man-days (eighty people counting for twenty days) in counting. ICAI has only around 4 lakh voting members. In general elections crores of people vote. Vote counting would take months.

This problem of counting difficulty is easily solvable if online voting technology is used. Right2Vote Infotech Pvt Limited, a Government of India tested, and certified eVoting technology provider has built automated STPV counting system which provides result instantly at the close of election. Election result can be announced within a minute of end of voting period. There is no manual counting involved which also eliminates any changes of errors and frauds.

Today, technology has advanced but there is resistance to change due to inertia and other reasons. But we need to realise that due to less than optimum systems like FPTP method which was used due to counting related limitation we are compromising democracy or choice of people. The candidate we might be electing might not be the true representative of the people’s choice.

Another problem with current booth based offline voting is that around 37% of the people are not able to vote. Percentage of people not voting is higher than vote received by the winning party. With online voting system, voter turnout can be substantially increased to almost 100% as online voting provide the convenience of voting from anywhere at any time without the inconvenience of travel to the booth and standing in a queue.

If we add up the impact of 37% lost votes (denial of right to vote) due to booth-based voting and impact of faulty simple majority method (FPTP), we will realise that we have not been able to implement real democracy or real choice of people. In a democracy, choice of people should be absolute and not just simple.