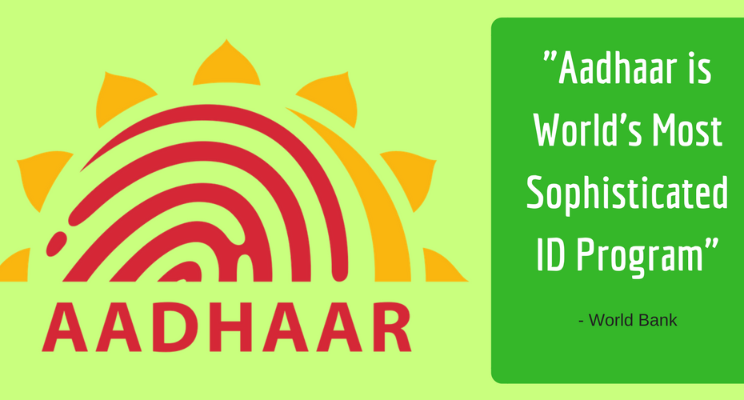 Let me start with a question.

What is the information that you are sharing with Government of India under Aadhaar which anyway you were not sharing? Biometrics – Fingerprint & Iris scans?

Even when I applied for my passport, providing fingerprint and Iris scan was a must. In countries like Malaysia and Dubai they took my fingerprint and iris scan at immigration and without that they would not let me enter their country. This shows that it was never a private data and nowhere in the world people have objected to sharing this kind of information.

First, we need to understand what is Bio-metric. As per dictionary:

Bio-metric verification is any means by which a person can be uniquely identified by evaluating one or more distinguishing biological traits. Unique identifiers include fingerprints, hand geometry, voice, facial features, earlobe geometry, retina and iris patterns, voice waves, DNA, and signatures.

All these years we have been providing facial biometrics to government and other bodies without complaining about privacy. In certain communities, they insist females in their family to cover their faces in public places. It can be called Burkha in Islam or Ghoonghat in Hinduism. Recently Germany banned covering face while driving so that cameras on roads can identify the driver. We have been showing our faces, submitting photographs for all kind of documents all the while and never complained about privacy. Then why are we complaining now?

Coming back to Aadhaar. What is Aadhaar? Aadhaar (meaning ‘the basis’ in Hindi) is a 12 digit unique-identity (UID) number issued to all Indian residents based on their biometric and demographic data.

Why nobody complains about privacy issue with SSN in USA? Just because it collects only facial bio-metrics in form of a photograph and not fingerprint and Iris? SSN started off in 1935 and Aadhaar in 2009. Considering the way technology has improved in these 70 plus years, it would have been foolish to go for manual bio-metrics and not go for mechanized bio-metrics when you are building a UID system from scratch. Specially because internet has been invented in the interim and most of the activities today happen without face to face contact – over the internet.

Why nobody complained about bio-metrics in 2009 when congress started it? The current government did not added bio-metrics in Aadhaar. It was there when Congress government initiated it. Suddenly, what has changed that the same Congress party is now considering it as a privacy risk?

Linking Aadhaar with everything – Bank account, Mobile SIM, tax return, investments etc. is the issue? Yes, the BJP government is now linking everything with Aadhaar. But why is that an issue. In USA, you quote your SSN number for everything. There also it evolved from a social security number to Unique Identity Number. At least, in India it was always supposed to be Unique Identity number.

Anyway, all places where now quoting Aadhaar is mandatory, providing identity document with photograph was anyway mandatory. In India, for a new sim card, opening bank account, filing tax return, making investment etc – always ID proof was required with biometrics in form of photograph. So, when providing identity certificate and biometrics in form photograph and signature earlier was not an issue, why is it an issue now when you have a single Unique identity document in form of Aadhaar? Do you have something to hide? Or the issue is that earlier manual verification was easy to fool and mechanized biometric verification is almost impossible to fool?

This brings us to benefits of Aadhaar and the biggest problem of India – Corruption. All these years we did not had a unique identification system and that made all kind of corruption very easy. We had ghost teachers in government schools, ghost doctors in hospitals, ghost workers in MNGREGA and other government projects, ghost farmers taking farm loan and then farm loan waivers, ghost citizen holding ration cards, ghost households taking subsidized gas connection, ghost students in government schools. The list is endless. It worked for politicians, bureaucrats and everybody connected with them. In 70 years, it completely made the DNA of the country corrupt and major section of population is illegitimately taking advantage of the system. There are fake bank accounts, benami properties, fake education degrees, fake driving licenses… People send fakes to appear in exams, political parties send fakes to vote in their favor. Most government lists including the voter list, ration card list, student list, teacher list have dummy names. We were not even able to identify terrorist who cross the borders and start living among us due to lack of unique identity like Aadhaar.

Our ex-prime minister, Shri Rajiv Gandhi, rightly pointed out that only “15p out of a rupee reaches the intended beneficiary”. Aadhaar is the Brabhma Astra (The ultimate weapon) to root out corruption. This unique identity is almost impossible to fool as it is not human dependent. The system verifies and the system authenticates. And this is why, everybody including the politicians, bureaucrats and people connected to them are not liking it. They have been so used to their corrupt income, that now they consider it as their birth right. They do not want Aadhaar to ruin it. And hence they are in all-out battle against Aadhaar. Problem these people have with Aadhaar is not Privacy, its efficiency!

One of the agreement used against Aadhaar is that bio-metrics like fingerprint and Iris can be faked and people can use fake fingerprints and Iris scan to fool the system. Well, nothing is 100% foolproof, but you would agree it is many times better than manual verification of picture on an identity card. 99.99% of corruption would be routed out with Aadhaar. For 0.01% of sophisticated criminals we need additional checks, that does not mean do away with Aadhaar based check.

Also, even without Aadhaar, the facial recognition software’s are very advanced these days and most government use it to track people. You have cameras on roads, all major malls, shopping complexes, residential buildings, government and private installations, hotels, airports, railways stations etc. If the government is looking for you, they would not wait for you to do a Aadhaar based transaction before they catch you. The first thing they use to track you is your mobile phone. Even without Aadhaar linking, Government has data of who owns which sim. There is a mandatory verification process before issue of sim cards, and government bodies regularly use it to track criminals. Most of these data including your geolocation, your last call details, your all call history is provided by telecom companies to government. You should be more worried that a private telecom company and their employees has so much data about you and can use it against you any day and not only in days of Emergency. They know where your daughter is at any particular time, where she goes regularly and what time. Which route she takes, who she interacts with, how much money she has in back account etc.

We should be thinking how we can use Aadhaar to make democracy strong, and this is exactly what we are working on at Right2Vote Infotech private limited. There is lot of wrong practices prevalent in our election system too and that is helping bad candidates coming to power. Aadhaar can help in cleaning the voter list, it can also help eliminate voting based on false identity which is a big problem in Indian elections. Aadhaar’s digital platform can help in online authentication and voting which can help major sections of population who are not able to vote today like – Non Resident Indians (NRIs), Soldiers, Doctors, in country migrants, old & sick people etc. When higher percentage of population exercise their Right2Vote, the democracy becomes strong.

We believe Aadhaar is THE most significant reform undertaken by the country in last 25 years and we should try to maximize benefits by leveraging on this great foundation. Aadhaar on top of internet revolution has given us opportunity to leap ahead of the developed countries. Aadhaar can help us root out our biggest problems – corruption and terrorism. We should not get distracted by privacy bogey created by the vested interest and waste this opportunity.